The Goo Goo Golls on Letting Love In...20 years of making music and keeping it real, mindyourmind correspondents, Heather and Diana got a chance to talk to them before their set at the John Labatt Centre in London, Ontario.The Goo Goo Dolls talk to mindyourmind about their new CD release, “Let Love In”. There appears a pattern of change, honesty and resilience which keeps them writing songs year after year.

This is your 20th anniversary, Happy Anniversary! A long time for a band to be together obviously. Not too many bands can say they’ve been together that long. What has been difficult for you through the years and what keeps you strong, together as a band?

John Rzeznik: Umm, you know, just like growing. In and out of people along the way, I mean, we outgrew our first drummer, and that was kind of painful but you know, now we have a new drummer...

John: Yeah, but I mean, you know, I think that’s the most difficult thing, the question always of your own relevance as far as what you’re doing and yeah, just trying to stay together without growing out of each other. We’ve learned to have boundaries, which is really important and I think that helps keep us together. We know when to ignore each other.

Robby: Yeah, I guess as you grow up, you know, as people, you let your band grow up, at the same time and you do what’s best for your band like you would in a regular relationship, what’s best for the relationship. You know, if you watch those things and be mindful that people are getting what they need out of it and that you’re not driving everyone else crazy, I guess that’s the key to any successful relationship, be it a rock band or political or social or anything.

This is your 10th CD released. You’ve had numerous hit singles. What would you say have been pivotal moments that have influenced your music and songwriting through the years?

John: Wow. Pivotal moments that influenced our songwriting…probably getting the record deal when you never thought you would, that was kind of a pivotal moment and then actually having some success at it, that was a pivotal moment…you know, umm, meeting a new girl, breaking up with her (laughs), you know, day to day life. Just observing situations in every day life and trying to sort of understand them.

You speak of guys like Michael Stipe, Paul Westerberg and Peter Buck “paving the highway you drive on”. You must admit that you yourselves have now paved the way for other musicians. Any thoughts about this?

John: Yeah, I mean, those guys have been, although Michael Stipe and Peter Buck became incredibly wealthy, they really were innovators in a lot of ways and they did a lot of the tough leg work and now we have an easier time with it because of bands like that, like The Replacements and R.E.M., that music, alternative music or whatever, I don’t even know what it’s called anymore…

John: Yeah, you know, they were my inspiration to write and perform and do that and you gotta look back to the things that formed who you are musically and otherwise.

John: But they’re 20 years younger than you.

Robby: Yeah, I realize that’s probably the reality. For some reason my brain happens to decode it that way.

Let Love In is a revolutionary album with songs like Better Days that resonate worldwide. Do you believe that the journey to get to such an accomplishment needs to be revolutionary as well?

John: Maybe it’s a series of small revolutions, small sort of skirmishes that amount to a revolution or whatever, you know, but we decided that we wanted this album to be different. I didn’t want to work with the same people making the album, you know I wanted to try out all new people and new perspectives on making an album and as far as writing goes, I wanted to lyrically, just get a little bit closer to the bone, just sort of write until you kind of freak out and go, “Whoa, whoa wait a minute, maybe I shouldn’t reveal too much here”, and still make music that’s lyrically up for interpretation. That’s one thing I don’t hear in a lot of music, a lot of new music, is that there’s no room for interpretation, they beat you over the head with very literal, very literal lyrics. I like to try and be a little more subtle.

Mike Malinin: It’s really frustrating how all that subtlety has been gone for years. You write a political song on the album and unless you say, “I hate the president”, nobody understands that it’s political.

John: Yeah, I mean, again, subtlety and using metaphors and you know, sort of turning a phrase in a weird way. That’s kind of the skill that’s being left by the wayside.

Your songs are very emotional. Can you talk to us on the honesty of having nothing to hide?

Diana: I would hope so.

John: Yeah, you know, I mean but to me, it’s taking it as close to your soul as you can and taking the big risk without a lot of regard to the outcome of what’s gonna happen out there in the real world. I mean, you know music critics are gonna slam the crap outta ya, but then…it’s strange…last summer, we did the biggest tour we’ve ever done in our entire career, and now we’re doing pretty well and I attribute that to in trying to be honest in the music and really putting yourself into it.

Heather: I think that your fans really appreciate that too.

Diana: That’s what makes good music, in my opinion.

John: Well, yeah it does, it does, but I think that a lot of music now is really just more image conscious.

Robbie: Sort of like an accessory, more than an experience for people, it’s just something that they wear on their coat.

John: I mean it’s fun to play, you know, rock star and dress up and all that kinda thing, but you gotta be honest with yourself, I think, I think really really, truly, deeply, and it’s like you kinda reveal your innermost details. There’s a way of doing that, without being completely blatant. I think a good example of that is Sarah MacLachlan, she’s an AWESOME songwriter and I have my own interpretation of her lyrics like I’m sure you do. I like a bit of ambiguity in what’s going on.

Many young people visit mindyourmind.ca for inspiration on how to cope with life, what advice would you give them?

John: I would say that no matter what you think, you’re probably more resilient than you think you are. No matter what anybody says. No matter what anybody says, you’re definitely more resilient and brighter and more talented than you think you are. I’ve had a million doors slammed in my face and eventually one of them opened up and I think persistence and belief in yourself despite whatever circumstances you’re in. That’ll get you what you want out of life. And avoiding all the stupid traps that a lot of people get into. Making moves out of fear, fear that you’re gonna lose your friends, fear that your girlfriend won’t like you, and things like that, you know when you’re young, those things are so transient and who’s gonna listen to me? I’m an old dude. Compared to a 15 year old kid, I’m an old man. But don’t make any decisions based on fear of losing – cause you won’t. If you stick to what you truly believe in, you’ve already won.

John: Where are they now? I mean I know it ’s hard, and hindsight is always 20/20, but uh, yeah…I mean just imagine this, like you’re 16 years old, you’re really popular, and that’s the BEST it’s ever gonna get in your life?

John: It’s ridiculous. There’s so much. The world is infinitely bigger than the tiny little community that you surround yourself with.

Diana: And small at the same time.

John: And tiny, yeah, it’s getting smaller. But it’s a big adventure. Like, my parents died when I was a teenager and I had to mourn that but and I did, but at the same time, it was the beginning of this insane adventure. I mean, I was cut loose and on my own at 16, so I’ve done all kinds of crazy, crazy stuff and I don’t know what it was, but I never felt like everything was completely black. I never felt completely in the dark. I always knew that there was something, somebody, some unifying force kind of watching out for me, you know. As weird as that might sound, but here I am, I mean, years and years later, chatting with you guys. It’s been a lot, it’s certainly been entertaining, but it’s been good too.

Heather and Diana: Thanks so much for talking with us, guys!

The band then went on and rocked a fantastic set! 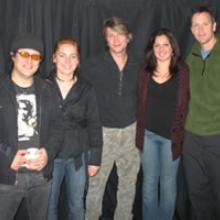 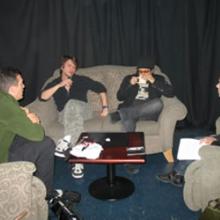