I remember being at a party in Grade Eight and sneaking outside to be alone. I sat on the swing-set in the dark and composed a story of a girl who felt so invisible that she died. The girl, as a ghost, found that she couldn’t go to Heaven until she learned to make friends, friends she could trust enough to reveal her ghost self. Then both as a punishment and a reward she would have to say good-bye to those friends and go to Heaven.

What did that story mean? It was both a metaphor for my feelings and a wish to be accepted. I knew that having real friends who I could be honest with would be heavenly, yet I still feared that friendships like that might come at a cost.

And now, thirteen years later, I still feel like a ghost. I feel separated from the world by my depression, but I also keep the world at arm’s length largely by choice. I work from home because it feels too much for me to go into a workplace for set hours every day. I don’t date because that too is far, far outside of my comfort zone. Am I being realistic about what I can handle considering my mental health, or am I keeping myself at the sidelines of life? I guess it’s a bit of both.

Real relationships would help me feel fully human and less like a ghost, but the only relationship I’ve been able to dedicate myself to is that with my therapist. That sounds extremely depressing but at least I have that relationship with her. If I can trust one person than maybe I can trust two and then three and then four, if I’m lucky.

When I say trust, I mean trust with the full reality of my life and my history. Almost all of my friends know that I have Post-Traumatic Stress Disorder, but very few people know what my biggest traumas actually are. I’m scared to burden them with my dark history. I wish I didn’t have the history that I do, so why inflict those images on other people?

Yet, I know that if one of my friends came to me when they were upset, I would want them to feel like they could tell me everything. I know I could handle it because I love them and together we’d make it through. So shouldn’t I be able to reverse that and trust that my friends would do the same for me? It’s so hard to trust that it would work; it feels so much safer to be alone. Old habits die hard.

I did manage to take a baby step in that direction a week ago, however. I’d been bawling my eyes out, partly because I didn’t feel brave enough to call even a crisis line for help. I wasn’t in danger of hurting myself but I did need support. I started catastrophizing, thinking that this fall is going to be a very hard time for me, and how on Earth am I gonna get through it without reaching out for help?

Just as I hit the height of my hysteria, I heard a knock on the door. Since the downstairs buzzer wasn’t pressed I knew it was one of my neighbours from my building, all of whom I really like and consider to be my friends. If I was looking for a sign that I have people around me who care, that knock was it. So instead of hiding like I normally would I wiped my eyes and timidly opened the door.

It was more than obvious that I’d been crying and I could see that fact register on my friend’s face as she spoke. “Are you okay?” I assured her that I was fine, repeating it over and over. I smiled and changed the subject and found that pretending to be okay actually helped me feel a little better.

My friend knew I wasn’t miraculously okay just because I was pretending to be but she took care of me in her own way. After inviting me into her apartment she lent me some movies and gave me some baking.

Later when I returned to my apartment I felt like that experiment had gone all right. I wasn’t able to be honest with my friend about my feelings, but I didn’t shy away from her care. I did feel a lot better after just being with her for that short amount of time.

Maybe opening up to someone can be a gradual thing, like getting in a swimming pool in the shallow end and then making your way into the deep end when you’re ready. You don’t have to jump right in.

So I’m working on feeling a little less like a ghost. Maybe you can work alongside me. Worst case scenario, we’ll have our Halloween costumes figured out. A whole bunch of ghosts hanging out together might feel a little less scary than being on our own. What do you think?

Erin Schulthies is the writer of Daisies and Bruises, a blog about "finding her way one step and one word at a time". After losing most of her youth to severe depression, she decided that since death was no longer an option, she had to find a way to live. This is it. 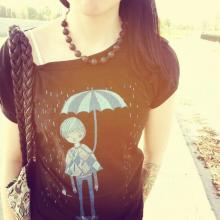